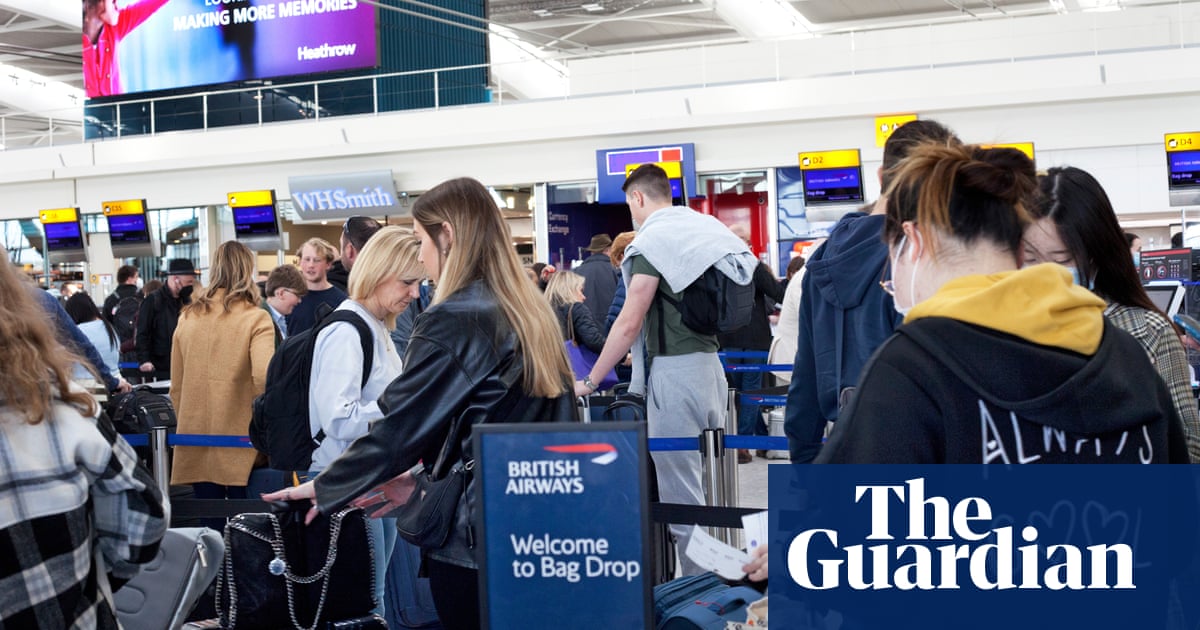 Heathrow airport has extended its 100,000 passenger a day cap for another six weeks as the aviation sector continues to struggle to meet increased demand for travel amid staffing shortages.

The capacity limit was initially meant to last until 11 September, but that date was pushed back on Monday to 29 October, overlapping with the autumn half-term break for most schools.

The UK’s busiest airport said the move was taken after the introduction of a temporary cap in July led to an improvement in punctuality and fewer last-minute cancellations.

The London hub was one of the worst hit by the severe disruption that blighted airports across the country in the May half-term and early summer, with long security queues and baggage system breakdowns.

Heathrow reported a £321m adjusted pretax loss for the first half of the year in July after experiencing weeks of lengthy queues and flight cancellations.

Hundreds of suitcases were filmed piled up at Heathrow in June after issues were reported with the baggage system and many people were forced to travel without their belongings and were told they may not get them back for up to two days.

Tens of thousands of flights have already been cancelled this summer as the industry struggles to cope with a rise in demand to near pre-pandemic levels amid staffing shortages. The industry has also been accused of failing to anticipate the bounceback after two years of disruption caused by the Covid pandemic.

The consumer rights group Which? said the move would leave the plans of thousands of passengers in limbo. Guy Hobbs, its travel editor, described the situation as a “mess” and urged the airport to provide clarity to holidaymakers about the flight schedule.

“Though the extension of the passenger cap may help Heathrow prevent a repeat of the unacceptable last-minute cancellations we saw earlier in the summer, thousands of people will now be anxious about whether their travel plans could be scuppered,” he said.

“Heathrow and impacted airlines must act without delay to provide travellers with clarity on which flights are being cut, and airlines must ensure affected passengers are aware of their rights to rebooking or refunds.

“The aviation industry and the government need to ensure that this mess is sorted out as soon as possible – passenger caps cannot be allowed to continue indefinitely.”

Heathrow said the cap imposed in July had resulted in “fewer last-minute cancellations” and “shorter waits for bags”.

It added the capacity limits would be kept under review and “could be lifted earlier should there be a sustained picture of better resilience and a material increase in resourcing levels”.

Heathrow chief commercial officer Ross Baker said: “Our primary concern is ensuring we give our passengers a reliable service when they travel.

“That’s why we introduced temporary capacity limits in July which have already improved journeys during the summer getaway.

“We want to remove the cap as soon as possible, but we can only do so when we are confident that everyone operating at the airport has the resources to deliver the service our passengers deserve.”

Heathrow had said it hired 1,300 people in the past six months, adding that it would return to pre-pandemic levels of security staff by the end of July.

The airport said it remained loss-making and did not expect to pay any dividends to its shareholders for the rest of the year, but it was offsetting increased costs through higher charges.