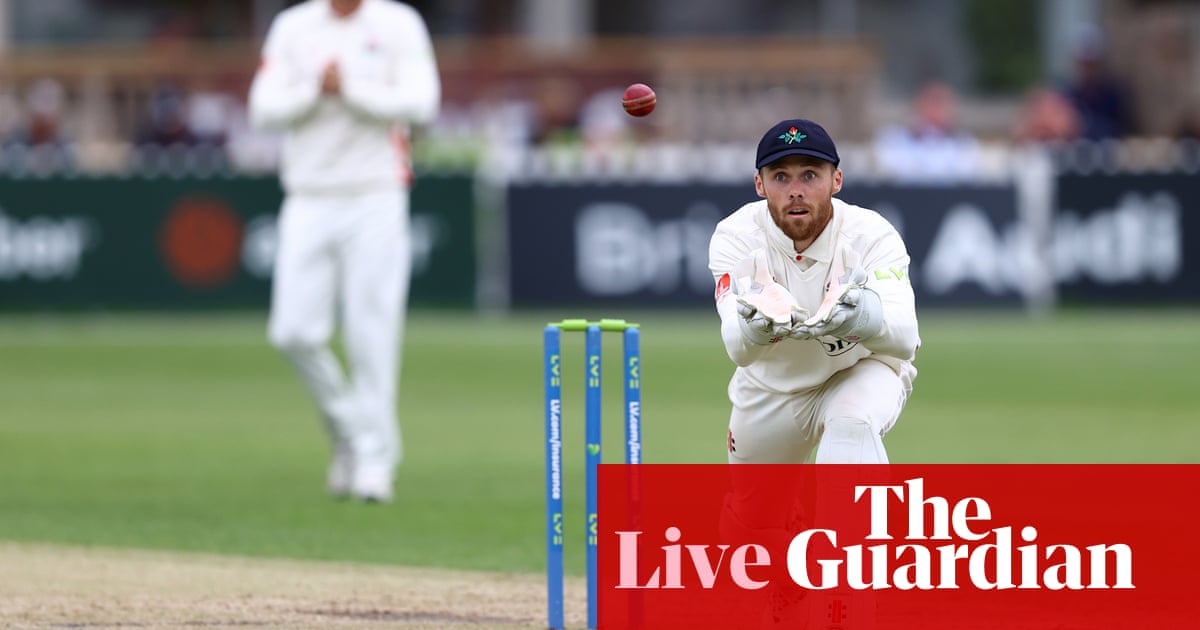 Twin hundreds for DBD! He’s been a thorn in Surrey’s side all game. He hits the ball in eccentric places sometimes which must be very hard to set fields to, all the while he has some strokes that are very easy on the eye.

In the two games still alive and kicking – at the Oval Daniel Bell-Drummond is seven runs away from a hundred in each innings for Kent. Top effort. The sun is beating down in South London now and with six wickets still needed this one might be out of Surrey’s reach.

The real excitement is by the sea as Sussex need 73 more to beat Derbyshire. Ali Orr weighing in with 139 (and counting) crucial runs (15 fours and SIX sixes) and the steady hands of Mohammad Rizwan at the crease on 46*.

The DRAWS are raining down now…

Fun and games. I spy ELEVEN bowlers in the innings at Trent Bridge.

Rocky eh, with things drifting into a bit of a soporific stupor maybe it is time for a bit of this:

Sussex need another 142 runs to beat Derbyshire, again outside sniff of a victory but the draw looming largest. As it is across the shires, hard to see much in the way of clear cut results unless something truly ridiculous happens.

At the Oval – Kent are defying Surrey, they are now 258-3 trailing by 84 runs. Daniel Bell-Drummond still there and he’s recently been joined by Jordan Cox. Surrey will want a flurry after tea, don’t count against it.

Northants are going strong – They lead Warks by 290 runs and Luke Procter is still there, biffing away on 126*

Centurion Sam Robson has been picked up by Ben Duckett (you heard right) in a leg side snare at Trent Bridge but Mark Stoneman is holding the fort for Middlesex against Notts. The opener isn on 86*.

Sussex will have to put pedal to metal after tea if they are to give themselves a chance of a win against Derbyshire – they need 169 runs and Ali Orr is 94*.

Sam Curran has made a thing happen at the Oval… he uproots Jack Leaning’s off stump and takes off like a whirling dervish around the outfield.

100 for Ryan Rickelton! We could be seeing a lot more of the South African this summer in the Test series.

Luke Procter goes to a hundred! With some heavy biffing too.

From my perch I can see Daniel Bell-Drummond and Jack Leaning rebutting Surrey. It’s all very sedate.

Sam Robson is one hit away from three figures at Trent Bridge. Middlesex have crept into a nine run lead.

Rickelton and Procter – who sound like a couple of no-nonsense cops or perhaps a suburban law firm? Forget it. Anyway, both batters are approaching three figures for Northants in Northants.

All quiet on the Champo front? I’ve just missed the steady accumulation of runs by the looks of it?

I’m off to grab a sandwich, ‘the skin o’ me belly is flappin’ me back’ as my old man is wont to say when he’s hungry. Back soon, keep an eye on things for me won’t you?

The rain is being a pain in Bristol. Hokey-cokey time for Glos and Lancs.

Here at the Oval, Kent are currently thwarting Surrey. They are on 163-2 and Bell-Drummond is caressing the ball across the carpet-like south-London turf.

Still raining in Bristol but there’s hope of a re-start at in about ten mins. Gloucs have a 111 run lead over Lancs in that one and seven wickets to call upon if necessary.

Northants have seemingly snuffed out the Warwickshire threat after that early wobble. They lead by 149 with eight wickets left. The fantastically named Ryan Rickelton and Luke Procter are both approaching half centuries.

At Hove – Sussex need 285 runs to vanquish Derbyshire. They’ve got nine wickets in the hutch in which to do so. Ali Orr currently going nicely* on 27*.

You knew this had happened already, right?

The clock ticks around to 1pm and that is lunch. Back soon with the scores on the doors and maybe even a reveal on the mysterious Tanya…

A few hits away now for Glamorgan*.

*Fact. That is not, repeat not a jinx.

Early lunch in Brizzle as there is mizzle.

Get your eyes on Glamorgan v Worcester:

Surrey on the charge – Dan Worrall has prised out Joe Denly lbw for 69. The fielding side have a pep in their step, beware Kent.

PLAY in Hove! Oh, and Derbyshire have declared.

I particularly like the hollow bluff attempt by Emilio Gay to make his ground here. Not fooling anyone.

Northants teetering – Emilio Gay is nicked off and the home side are on a precarious 32-2. Leading Warks by 78 runs.

They do get on at the Oval – and there is a wicket! Sam Curran pins Ben Compton LBW for 48.

At the Oval – The rain has abated and the players amble out ready to begin only for the spittle to start once everyone is in position! A cursory piece of tarp is rolled over the wicket, I don’t think it will be long before we have actual play.

Billy Root is still there on 69* but Glam are now SIX down. Worcs need 4 more wickets and the Welsh side require 65… GULP.

This made me chuckle courtesy of ‘Mesnilman’:

‘Jim here standing in for Tanya as she is on a mysterious mission.’

Jim, has Tanya left behind a strange looking implement whilst she is away on this “mysterious mission”? Does it have an iridescent sheen, and glows when you pick it up by the handle?

It is the jinxing knife. Use it wisely, for it affords you great power. Many have held this twixt thumb and forefinger, and felt a force coursing through their veins.

Use it wisely, great things may occur.

Wield it without thought, and may the Cricketing Gods have mercy upon you.”

A declaration of intent?

There is lots of cricket at the minute eh? I’ll excuse you for occasionally nipping over to join m’colleague Dan Gallan who is on the OBO tools as England Women take on South Africa at Taunton:

Rain Rain Go AWAY – A couple of delayed starts – at the Oval and Hove as a belligerent bit of rain hangs round the south. We have play everywhere else though.

Notts racked up the runs at Trent Bridge – Middlesex are scrapping to stay in the fight, following on in response to a meaty 551/8d laid down by their hosts they are 63-0 and 112 runs adrift.

Eyes on Hove – as landlubbers Derbyshire could turn up the heat on the south coasters on the final day, leading Sussex as they do by 341 runs.

Fingernails beware at Worcester as Glamorgan need 99 more runs to win and Worcs need to snare five more wickets. Billy Root is at the crease on 46*.

At the Oval – Kent are up against a South London brick wall as they follow on, they trail by 221 runs but have ten wickets in hand and a day to bat to cling on for a draw. Openers Compton and Denly are making a better fist of it second time around – on 47* and 63* respectively.

Slow going in Northampton – Dom Sibley got his limpet on to eke out 102 from 273 balls and Warwickshire have sedately moved to 396-8 in response to the home side’s 451. Hard to see anything other than a gaping draw in this one.

Things are livelier in Bristol – Gloucs are 99-3 in their second dig and have a slimline tonic lead of just 34 over Lancs. The Red Rose will be sniffing for early wickets in order to force a result.

Essex pipped Hampshire in a thriller on a firebrand pitch at Chelmsford, thanks to Simon Harmer. He walked off patting a top pocket stuffed with wickets, seven for 161 in the second innings, and career-best match figures of 15 for 207.

Hampshire were chasing 299 and, at various points, victory seemed possible. But once the big-hitting Felix Organ fell, the top order wobbled and six wickets fell for 65. The tail wagged but Harmer had the last laugh when, with 12 needed, Keith Barker tried to tonk him only to fall short of the rope and into the hands of Paul Walter.

James Vince, the Essex captain, was not happy. He said: “Due to the conditions we had to play village cricket really and attack the short side and hope you got lucky.”

The openers Ben Compton and Joe Denly gave Kent hope of pulling off a draw against Surrey after an unbeaten partnership of 121 following-on. Kent’s first innings had been cracked open by the 19‑year‑old Tom Lawes who took three for 10 in 18 balls on his Championship debut.

Fifties from Luke Wood and Steven Croft gave Lancashire a first-innings lead against Gloucestershire at Bristol; and a hundred from Colin Ingram kept Glamorgan interested in an unlikely run-chase against Worcestershire at New Road – though the second new ball waits in the morning.

Dom Sibley’s second hundred of the Championship season, a mellow affair, pretty much ensured a draw between Northamptonshire and Warwickshire at Northampton; while Derbyshire did not enforce the follow-on, and are wobbling at 127 for seven, with Jack Brooks taking five for 46. Mohammad Rizwan had earlier made his first century for Sussex.

Middlesex are following on against Nottinghamshire at Trent Bridge.

Hello everyone and welcome to day four of the CC Blog Live!

Jim here standing in for Tanya as she is on a mysterious mission. More on that later. I’ll be helming the blog for the day, Lady Aldred has promised you’ll be kind…

I’m currently sat at The Oval and it is raining. From my perch I can see damp groundstaff scrabbling with tarpaulin in the mizzle. The good news is it is supposed to pass relatively shortly.

Time for a quick coffee and then let’s take a trip around the grounds to see the state of play. Do get in touch below the line, on email or the Twitters.