Skip to content
HomeNewsFighting rages in Marib despite UN truce 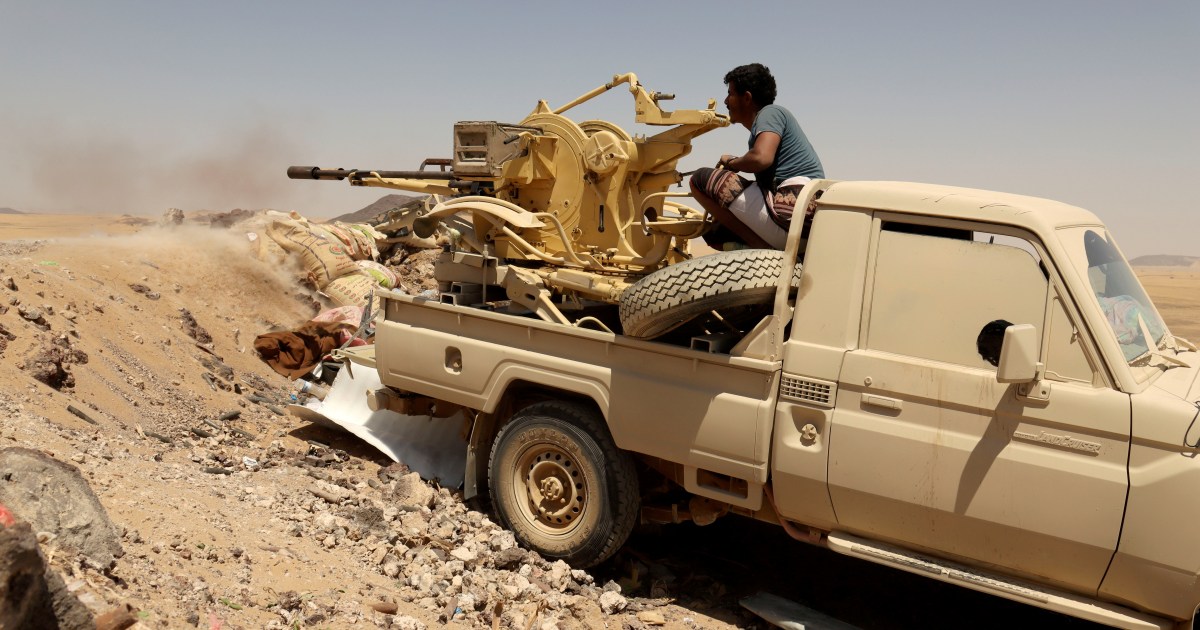 Marib, Yemen – Despite the announcement of a two-month truce by the United Nations on April 2, the front lines of Yemen’s Marib have not been quiet.

Iran-aligned Houthi rebels resumed their attacks on the energy-rich government stronghold, the last in Yemen’s north, soon after the truce announcement.

While the fighting has not been at the intensity of past Houthi offensives in Marib, it raises questions as to the group’s intentions, even with the UN and the international community more optimistic that a peace deal to end Yemen’s war can be reached.

Salim Ali, a government soldier, said Yemeni army positions had come under Houthi attack on Marib’s southern front since the beginning of the Muslim holy month of Ramadan at the start of April.

“We’ve managed to repel them,” Ali told Al Jazeera. “They [the Houthis] are intensively using explosive-laden drones against our positions and vehicles, and I have lost a comrade.”

Despite setbacks in neighbouring Shabwah governorate at the beginning of the year after an offensive by forces backed by the United Arab Emirates, the Houthis have begun sending new troops to Marib’s front lines, according to a military official in the Marib-based Yemeni Defence Ministry, who asked to remain anonymous.

“They [the Houthis] have redeployed fighters and vehicles, including tanks, in large numbers from elsewhere, including Taiz, Hodeidah and Hajjah front lines to Marib recently,” the official said. “We have also seen intensive movements [for the Houthis] on the southern and western [Marib] fronts.”

Battles in Marib, which lies to the east of Yemen’s capital Sanaa, had abated since UAE-backed Giants Brigade forces pushed Houthis out of the centre of Hareeb district, in southern Marib, in February. Front lines have not seen any major change since then.

At the start of April, UN Special Envoy for Yemen Hans Grundberg announced that the parties to the conflict had agreed, for the first time since 2016, to halt offensive military operations inside Yemen and across its borders for two months.

Saudi-led coalition air strikes and cross-border Houthi attacks on Saudi Arabia have stopped. Yet, the fighting in Marib has continued.

“Although the truce is broadly holding, reports of military operations, particularly around Marib, are concerning and must be addressed urgently through the mechanisms established by the truce,” Grundberg said at a security council briefing on April 14.

Yemeni army media has accused the Houthis of breaching the truce by launching attacks against their positions in Taiz, Hodeidah and Marib.

For their part, the Houthis claim that the Saudi-led coalition and the Yemeni government are not fulfilling their part of the truce, which includes free access for fuel tankers to Hodeidah’s port, and the resumption of flights from Sanaa Airport, which has been closed to the public since 2015.

“They [the Saudi-led coalition] are still obstructing flights and are stopping ships,” said Hussein al-Ezzi, a leading Houthi, in a tweet on April 15. “We face opponents who do not respect their commitments; there is no doubt that the truce is on its way to failure if they do not stop their violations and stalling.”

That seems to be the message from the Houthis, with a member of the group’s negotiating team, Abdulmalik al-Ajri, focusing on the same theme.

“The truce represents an opportunity to put peace back on track, or [at least] that’s how we see it and how we want it,” al-Ajri said. “But until now, the response from the aggression countries [the Saudi-led coalition] to the armistice does not lead to optimism … we hope that you will not misjudge our desire for peace.”

Some analysts, however, think the Houthis will use the truce as a means to regroup and escalate again.

“The Houthis’ escalation in Marib doesn’t come as a surprise,” said Nadwa al-Dawsari, a non-resident fellow at the Middle East Institute.

“Just like the Stockholm agreement, this truce will end up being another opportunity for Houthis to breathe, regroup, and escalate. They have never respected or honoured any previous truce, so this will not be the exception,” al-Dawsari added, in reference to a 2018 UN-brokered agreement that stopped a Saudi-led coalition backed offensive against Houthi-held Hodeidah.

The Yemeni government military official claimed the Houthis would attempt to take advantage of the truce and cessation of the Saudi-led coalition air strikes “to make any breakthrough against our defences.”

Air strikes have played a significant role in defending the city, inflicting heavy losses on the Houthis and slowing down their advances.

“They [the Houthis] have plans to take Marib and they aren’t going to give up those plans voluntarily, “ al-Dawsari said. “We know they have been mobilising forces and heavy military equipment and weapons into Marib for another major offensive to capture the city.”

A refuge for displaced Yemenis

Despite that, the city, which has become a refuge for hundreds of thousands of displaced Yemenis, is bustling.

The population of Marib has grown from around 300,000 to over two million, most of them internally displaced people, since 2015. That population increase has led to an expansion of the city, and economic growth.

A walk through Marib at night reveals how crowded the city has become, and what a risk a fight for the city would be.

Labourers wait on pavements for work, families shop, while others walk along newly-constructed roundabouts and streets.

Mohammed Saleh and his wife Amani moved from Houthi-held Sanaa to Marib to begin a new life four years ago. He now owns a cafeteria, while his wife works as a kindergarten teacher.

“We hope the truce continues and peace prevails across our country,” said Amani Saleh. “We are very tired of the war and we want it to stop forever. We don’t want to hear the sounds of missiles and gunfire again, but who can convince the Houthis.”

Mohammed, unlike Amani, seems more pessimistic about the Houthis abiding by the UN-brokered truce.

“We don’t trust the Houthis,” he said. “They are still sending ballistic missiles towards the city. Last week a missile landed near our neighbourhood, but thank God, no one got hurt. So, what truce are they talking about? We don’t see any here.”

Yemen’s truce, and the continued fighting in Marib, come as Saudi Arabia attempts to unite the divided anti-Houthi camp.

On April 7, Yemen’s exiled President Abd-Rabbu Mansour Hadi ceded his powers to an eight-member presidential leadership council, marking an end to his 10-year period in power.

The council, led by former interior minister Rashad al-Alimi, and including the powerful governor of Marib Sultan al-Aradah, will run the government and attempt to negotiate a peace deal with the Houthis.

But for people like Salim Ali, who says he has not received a salary in months, it will be hard to make peace with the Houthis.

“We will fight to the end, even if we lack basic military equipment like sniper rifles, anti-tank guns, armoured vehicles, and drones,” Ali said.

“Last year, the Houthis displaced me and my family from our home in southern Marib. I will not let that happen again,” he added. “Marib is our honour, dignity, and freedom, so we will never give up defending it, whatever the cost.”