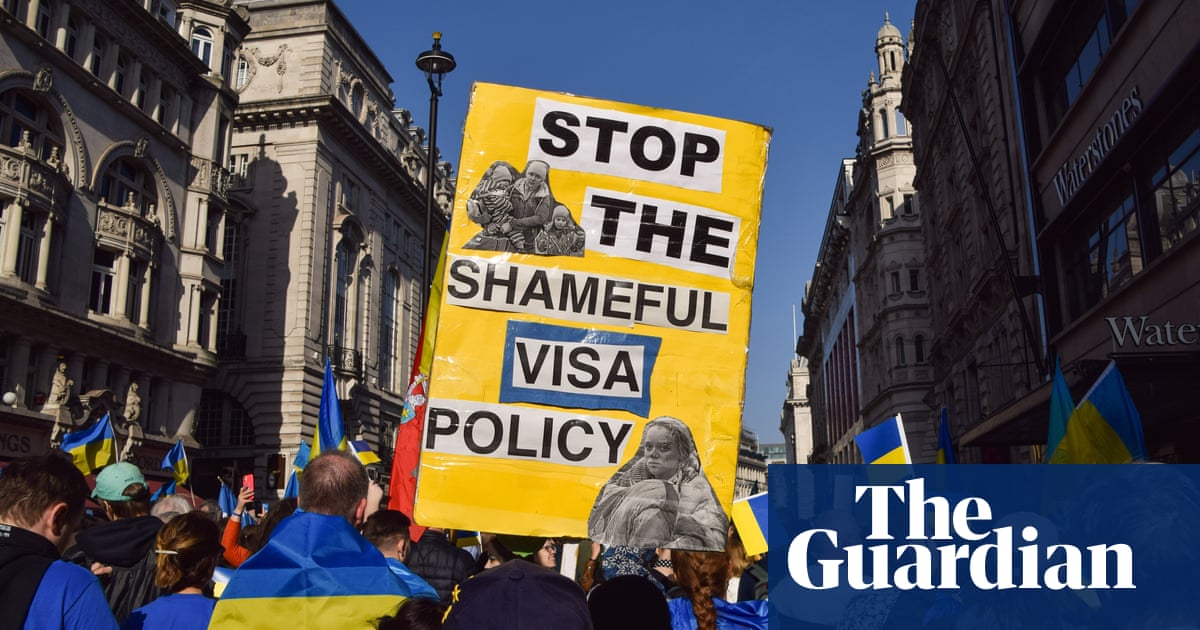 A charity that is helping Ukrainian refugees trying to come to the UK has said no visas have been granted to those it is supporting, nearly a fortnight after a government scheme was launched.

The head of Positive Action in Housing, Robina Qureshi, said the government’s Homes for Ukraine scheme had given people “false hope” and amounted to a “gimmick”.

She said it had led to refugees turning to social media in desperation to seek sponsors, and those seeking help could be exploited by human traffickers.

The government scheme opened on 14 March and aimed to allow individuals, charities, community groups and businesses to bring Ukrainians, including those without family ties to the UK, to safety after the Russian invasion.

Announcing it in the Commons, Michael Gove, the housing and communities secretary, said there was no limit on the numbers coming in, and ministers have speculated that they expect eventual numbers to reach hundreds of thousands.

Qureshi said: “The government made a fanfare of its Homes for Ukraine community sponsorship programme. Michael Gove told parliament on 14 March that there was no limit on the numbers coming in. Yet none of the families we are supporting have yet got a visa to travel under the community sponsorship scheme and are still waiting.”

Those in Ukraine have already criticised the scheme, saying the claims made by ministers do not match the reality in the country.

Qureshi said Positive Action in Housing had been helping 483 families, young people and unaccompanied minors in the last week alone who needed a sponsor who would house them. She said the forms involved in the scheme were “tortuous and confusing – with no guideline”.

The charity runs Room for Refugees, the UK’s longest-running refugee hosting programme, which began in 2002. Speaking to PA Media, she gave examples of people putting themselves at risk, where they had arranged places to stay and sponsors through social media.

One included a Ukrainian mother who said she was sending her two teenage sons, one of whom is autistic, alone to make the journey across Europe.

“Another woman told us that she would leave Kharkiv now if the UK government offered a visa, but she is waiting in her home terrified,” Qureshi said.

“Refugees are turning to wholly unsafe methods of getting here, meeting people in Facebook groups, on social media. And this government is responsible for giving people false hope and putting them further in the way of danger.”

She said human traffickers “thrive on refugee conflicts and displacements anytime there are vulnerable populations on the move”, and visa restrictions should be waived.

“[It] has resulted in obvious and dangerous breaches of basic safeguarding on an industrial scale – all instigated by one government department.”

On Saturday the policing minister, Kit Malthouse, said refugees had arrived in the UK through the Homes for Ukraine scheme, but that the number would not be published until next week.

Separately, the government has a Ukraine Family Scheme for people seeking to join relatives or extend their stay in the UK.