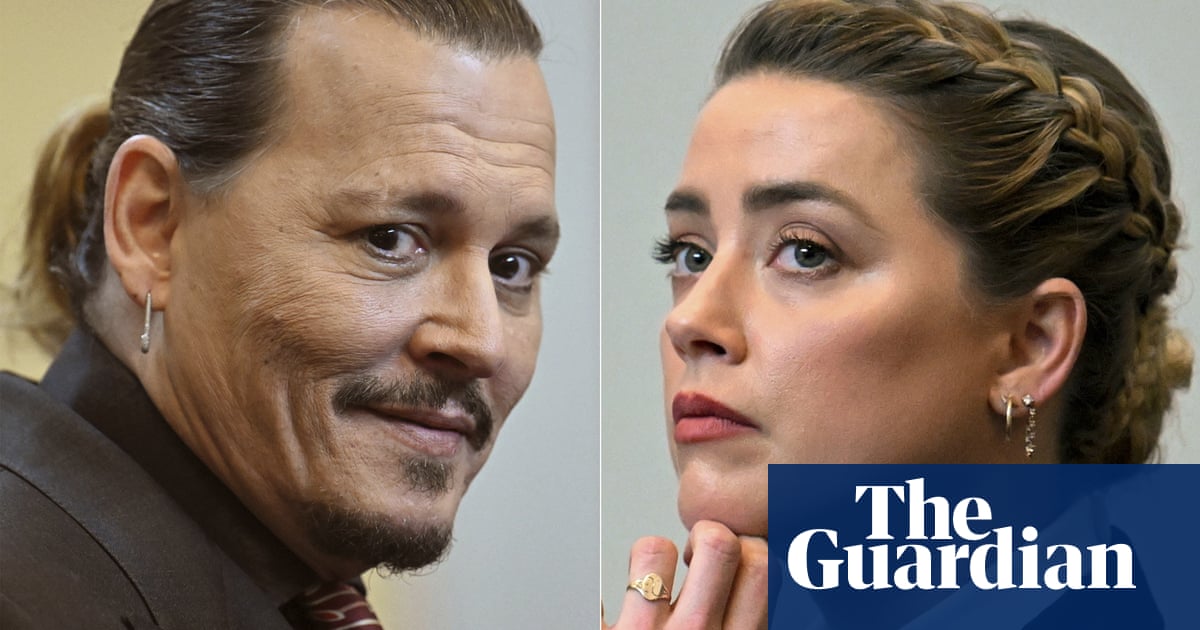 Attorneys for Johnny Depp rested their case on Tuesday after 13 days of searing testimony in the actor’s $50m defamation lawsuit against his ex-wife, actor Amber Heard.

In court in Virginia, Heard’s attorneys then demanded the judge dismiss the action – before following on from Depp’s witnesses with a psychologist’s description of his alleged psychological and violent domestic abuse against her.

Without jurors present, lawyer Ben Rottenborn asked the judge, Penney Azcarate, “to strike the plaintiff’s evidence and award summary judgment in whole or in part to Ms Heard”.

The petition to dismiss was largely procedural. After hearing counter-arguments from Depp’s counsel, Azcarate ruled the trial would proceed.

Heard’s first witness, an expert in interpersonal violence, offered a graphic description of Johnny Depp’s alleged violence against his former wife, telling jurors in the dueling defamation case that Heard suffered from post-traumatic stress disorder as a result of “intimate partner violence by Mr Depp”.

Dawn Hughes, Amber Heard’s first witness in her defense of Depp’s libel claim, has told the court in Virginia that she conducted an “objective evaluation” of Heard over 21 hours, and consulted medical records, psychological treatment notes, deposition testimony in the UK libel case and Heard’s mother.

Depp’s alleged abuse of Heard “was pushing the symptoms, related to the intrusive phenomenon, related to her avoidance, her differences in her mood”, Hughes said. She rejected claims that Heard had likely feigned symptoms of PTSD, as offered by Depp’s witness, Shannon Curry.

Hughes testified that Heard was abused by her father and watched her parents struggle with substance abuse.

“That environment taught her that she could love someone who hurts her. She learned how to have this tolerance for cognitive inconsistency, for two what should be diametrically opposed emotions.” As she had tried to do with her parents, Heard “truly believed she could fix Mr Depp and rid him of his substance abuse problems”.

Heard bowed her head during parts of Hughes’ testimony.

The psychologist, who has testified in the trials of R Kelly and Nxivm cult leader Keith Raniere, earlier testified that writing messages could be considered emotional abuse, likely a reference to messages scrawled on the walls of the house they shared in Australia after Depp’s finger was cut during a March 2015 fight.

Hughes testified that Depp was obsessively jealous, interrogating and resorted to obsessive control of Heard. He was “obsessed with infidelity” and called leading men or directors she worked with to warn them he “had eyes” on them. Heard adapted to the threat by toning down what she wore to “mom jeans” style, the court heard.

Depp tried to control what she wore when she was not with him, the jury was told. He’d read her scripts to check for love scenes and constantly accused her of infidelity.

“She had to try to conceal and maneuver around him to try to have the career she wanted,” Hughes said.

Hughes said Depp was “obsessively jealous” of James Franco, that Heard was sometimes “afraid to go home” when Depp was high on drugs or had been drinking.

On a 2015 Boston to Los Angeles flight, Hughes said, Depp “starts talking about James Franco” to Heard, saying: ‘Hope you had fun with your escapades’. He kicked her on the back and she went forward … ” The psychologist also said Depp railed about Heard and actor Billy Bob Thornton.

The majority of Depp’s violent and sexually violent episodes were in “these alcohol and drug-fueled rages”, Hughes testified.

“When Mr Depp was drunk or high he threw her on a bed, ripped off her nightgown, and tried to have sex with her. There were times when he “forced her to give him oral sex when he was angry” or in “moments of dominance of him trying to get control over her”.

In one incident, Hughes said, Depp accused Heard of being flirted with by another woman and he performed a forcible cavity search on Heard “ostensibly looking for drugs”.

While the couple was visiting Australia, she said, Heard was subjected to one of the most severe episodes of sexual violence in the course of the couple’s 15-month marriage.

“When he was beating her and choking her and telling her ‘I’m going to fucking kill you, I hate you, I hate you’, he grabbed a bottle off the bar and penetrated her with that bottle. Miss Heard reported to me of disassociating and ‘going outside of her body’. The only thing she was thinking was, ‘Oh God, I hope it’s not the broken one’ [bottle],” Hughes told the court.

At the closing of Depp’s attorney’s presentation to the court earlier on Tuesday, Erin Falati, Heard’s nurse, appeared via pre-recorded video, telling the court Heard said she had issues with cocaine and alcohol and struggled with jealousy, anxiety and co-dependency in relationships, including that with Depp.

“I recall a general sense of discord in the relationship … disagreements, reconciliation and kind of that repeating pattern,” Falati said.

A note from Falati displayed in court showed an instance when she saw Heard bleeding from her lip, allegedly after an altercation with Depp.

Depp’s final witness, the forensic accountant Mike Spindler, estimated that Depp lost $40m in earnings as a result of Heard’s Washington Post article in which she described herself as a survivor of domestic abuse.