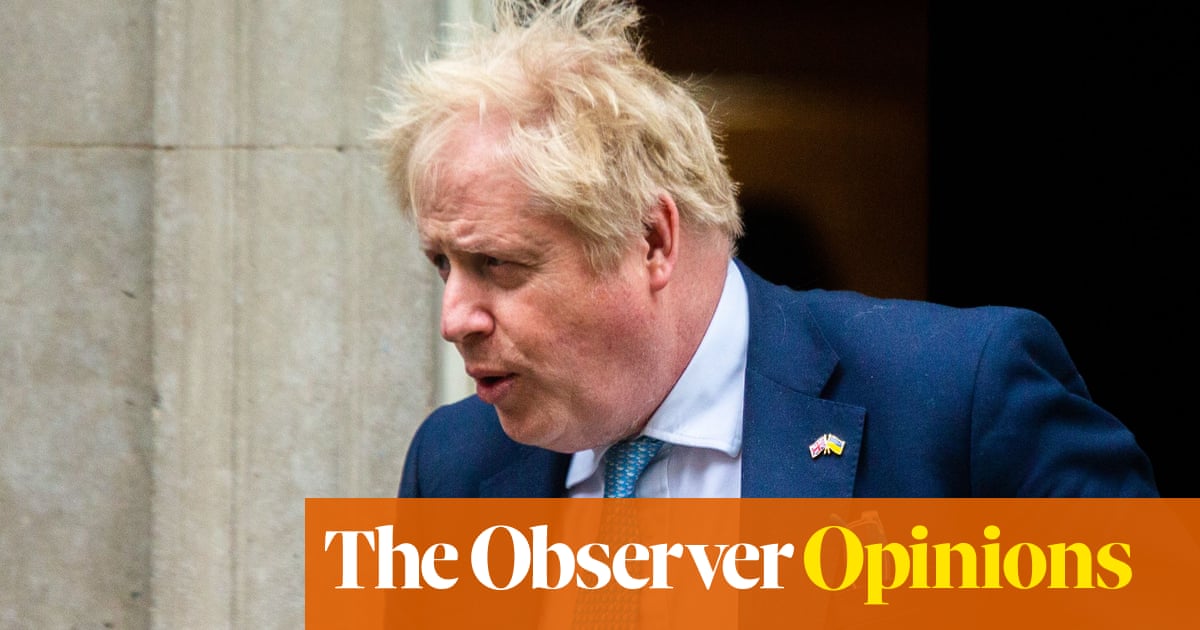 He thinks he is going to get away with it. When Boris Johnson addressed a recent dinner with his parliamentary party, he poked fun at those Tory MPs who were so disgusted by partygate that they tried to remove him. The king of crass comedy quipped that they should be grateful that they did not live in Russia where Vladimir Putin has “nobody to write 54 letters to Sir Grahamski Bradyski”. He was especially mocking of those Conservative MPs who wrote to demand a confidence vote and then withdrew their letters after the invasion of Ukraine. These missives were “elastic – they go in and you can pull out”.

Just a few weeks ago, he stood on the precipice of losing the premiership. Someone who ought to know tells me that the number of letters submitted to Sir Graham got close to the threshold that would have triggered a confidence vote. Now the prime minister feels able to wine, dine and crack wise with his MPs. And to do so in the very same week that the Metropolitan police started issuing penalties for law-breaking at Number 10, imposing 20 fines in the first wave and with more expected to follow. It is appalling enough that the Met has found a pattern of criminality at the very heart of government. It is worse that the prime minister treats this as a laughing matter. One senior Tory present at the dinner says: “The number of jokes Boris devoted to partygate showed that he is either monumentally insensitive or monumentally self-confident.” Or both.

This confirms that Mr Johnson feels neither genuine shame nor sincere remorse for the rampant lockdown-busting in Downing Street during the pandemic. It also tells us that this scandal has not changed his essential character one jot. That ought to alarm everyone, including the Tory MPs who laughed along with his jokes.

They may have found the prime minister funny, but there is no reason to suppose that the country feels entertained. On their way to the revelries at the Park Plaza hotel near Westminster Bridge, Conservative MPs had to pass a protesting group of bereaved families of Covid casualties who shouted “shame on you” and “off to another party, are we?” Those who lost loved ones, often being denied the opportunity to hold the hand of a dying relative for one last time or even to attend the funeral, have not forgotten or forgiven. Partygate cut through to the public much more widely and much more deeply than the typical political scandal. Everyone can grasp the stark hypocrisy of the denizens of Downing Street flouting the restrictions that they imposed on everyone else. Nor can it be disputed that Mr Johnson issued repeated false denials about it to both parliament and the public. He remains under investigation himself, the events he attended including the notorious “bring-your-own-booze” party organised by his private secretary. The prime minister’s excuse, that he mistook a garden packed with people chugging wine for “a work event”, is no less risible now than it was when he first concocted that alibi.

At Westminster, partygate is largely treated as yesterday’s news. Jacob Rees-Mogg, the cabinet’s specialist at defending the indefensible, has tried to exploit the war to dismiss the scandal as “disproportionate fluff”. But voters don’t think in the same way as politicians and telling them that they were silly to be affronted by partygate only makes them crosser. The public is capable of holding two thoughts in its head at one time: the war in Ukraine is a grave international crisis and law-breaking at Number 10 is a grave issue for Britain’s democracy.

The polling companies agree that the public have settled on a verdict that is unlikely to change, whatever happens next. They have made up their minds about the prime minister. James Johnson, a pollster who sampled opinion for the Tories when Theresa May was at Number 10, reports that there has been a “consistent picture in all our focus groups since the start of January”. He quotes one voter describing the Tory leader as “a buffoon, a joke, an idiot and, worst of all, a liar. You can’t have a liar.” Another calls him “a hypocritical clown”. A third settles for the simple but searing “pathetic”.

When the revelations about partygate were at their most intense, Mr Johnson’s approval ratings plunged to depths not visited by any prime minister in more than 25 years. They have recovered only a little since the beginning of the war. He remains deeply unpopular. There’s been scant sign of the “rally to the flag” benefit that Number 10 hoped would result from the outbreak of the most serious conflict in Europe since 1945. Johnson loyalists who talked deliriously about the war providing him with a “Falklands moment” have shown themselves in need of a lesson in good taste, a history tutorial and the attention of a clinician.

Tories are now beginning to twitch about the local elections in early May. “I think they are going to be bad, possibly very bad, especially in London,” says one Conservative MP. These tests of public opinion will be immediately preceded by the hike in the rate of national insurance biting into pay packets for the first time, a huge jump in energy bills and surging prices for many other essentials. Lengthening waiting times and staff shortages have contributed to an unprecedentedly sharp fall in public satisfaction with the National Health Service. If the Tories are thumped at the ballot box this spring, it will be hard to say definitively how much of it is down to partygate and how much of it is about the state of public services and the squeeze on household budgets. What we do know, from past experience, is that voters get angrier about political scandals when they are feeling miserable about their own circumstances. Some Tories see danger for their leader in seething fury about partygate combining with discontent about the cost of living crunch. Says one: “It will make some of my colleagues more susceptible to the argument that we won’t win the next election if we don’t change leader.”

Even some of the Johnson loyalists believe that “he is not out of the woods yet”. The police investigation into a dozen events in Downing Street during the pandemic, at least three of which were attended by the prime minister, is far from exhausted. No previous British prime minister has been found to have broken the criminal law while in office. If the police serve him with a fine, he will be in the position, always previously held to be untenable, of a law-maker being exposed as a law-breaker. Conservative MPs will then have to decide whether to remove him or make themselves accessories to the crime.

Context will matter a lot to their calculations. “It is all about the timing,” says one former Tory cabinet minister. If he gets fined when Ukraine is still the centre of attention, or if some other emergency has erupted, then there will be a reduced chance of Mr Johnson being defenestrated by his MPs. If not, then he will be in greater danger of being ejected at the hands of his own party.

Even if he escapes a police penalty, many of the public have already concluded that the prime minister is an incorrigibly mendacious rule-breaker. That is a problem not just for the Conservative party, but for everyone else too. One of the many damaging dimensions of this scandal is that it has severely compromised the capacity of the government to carry people with it at a time when effective and persuasive leadership is vitally necessary. In hard and perilous times, a leader has to be able to ask difficult things of the people in the national interest. This is a period when Britain needs a prime minister who can convince the country that sacrifices need to be made for the sake of helping the Ukrainians to resist the Russians, in order to cope with the global energy crisis, or in the event that Covid springs another nasty surprise on us. Mr Johnson cannot be that prime minister.

He has lost the trust of the public and not won it back among his own MPs. Many still want him gone, not least for fear of what might happen next if the greased piglet somehow manages to squirm his way out of partygate. One senior Tory remarks: “If Boris gets away with this, he will think that he can get away with anything.” That’s a formula for more, and quite possibly worse, outrages to come.

Boris Johnson may think he is done with partygate, but the anger about it is not done with him.