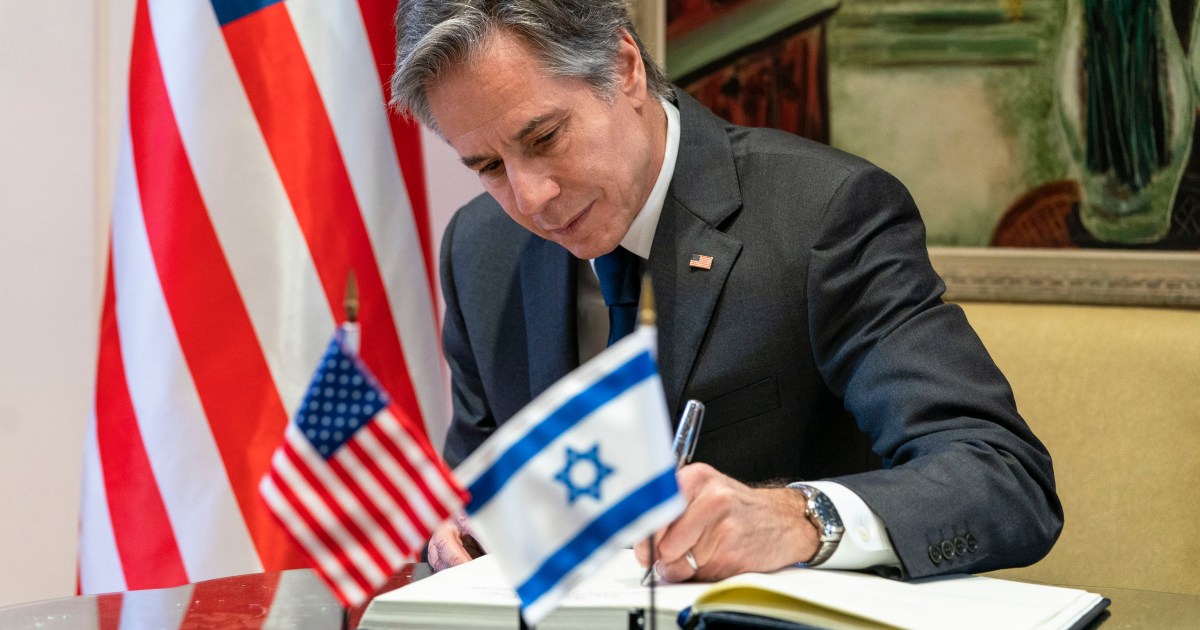 Secretary of state says the US and Israel are ‘committed’ to preventing Iran from getting a nuclear weapon as he backs the deal.

US Secretary of State Antony Blinken says Washington will work together with Israel to prevent Iran from developing a nuclear weapon, as the two close allies acknowledged differences over negotiations with Tehran.

Blinken made the comments in Jerusalem alongside his Israeli counterpart Yair Lapid, who told reporters Israel had “disagreements” with Washington about a possible deal to revive the 2015 nuclear accord with Tehran.

Blinken said President Joe Biden’s administration believes that “the return to full implementation” of the deal was “the best way to put Iran’s programme back in the box that it was in but has escaped from since the United States withdrew from the agreement” under former President Donald Trump in 2018.

The Biden administration has been working to renew the nuclear deal, known as the Joint Comprehensive Plan of Action (JCPOA), which put curbs on Iran’s nuclear programme in exchange for billions of dollars in sanctions relief.

Israel’s government firmly opposed the terms of the deal and has said that re-activating the original deal is insufficient to curb the Iranian threat.

But, Blinken said, “when it comes to the most important element, [Israel and the US] see eye to eye. We are both committed, both determined, that Iran will never acquire a nuclear weapon”.

Lapid said in the midst of differences with Washington, Israel remains in “open and honest dialogue” with its closest ally on the Iran nuclear issue.

Iran insists its nuclear programme is for civilian use only.

Blinken made the comments shortly before joining his counterparts from Israel and four Arab countries that established diplomatic ties with Israel in 2020, at a special gathering where the nuclear deal was expected to top the agenda. Israel and many of its neighbours are fiercely opposed to the deal, which they believe will embolden and enrich Iran. They have accused Iran of waging proxy wars in the region – a charge Tehran has denied.

“The Israeli prime minister expressed very deep concerns about the idea of the Revolutionary Guards being taken off the US terror list. Something certainly Blinken did not rule out in any way,” Al Jazeera’s Harry Fawcett, reporting from West Jerusalem, said.

“There remains a very deep divide and Lapid’s assertion that Israel retained the right to act independently to prohibit Iran from nuclear weapon in the future.”

The European Union’s foreign policy chief said at the weekend that the deal will likely be renewed “in a matter of days.”

Iran has been engaged for months in talks with Britain, China, France, Germany and Russia in Vienna to revive the accord. The US is taking part indirectly.

On Sunday, US Special Envoy for Iran Robert Malley said he was not confident that a nuclear deal between world powers and Tehran was imminent.

“I can’t be confident it is imminent… A few months ago we thought we were pretty close as well,” Malley said at the Doha Forum international conference.

“In any negotiations, when there’s issues that remain open for so long, it tells you something about how hard it is to bridge the gap.”

His assessment of the negotiations in Vienna came after Kamal Kharrazi, a senior adviser to Iran’s Supreme Leader Ayatollah Ali Khamenei, said a deal could come soon.

“Yes, it’s imminent. It depends on the political will of the United States,” Kharrazi told the Forum.

The issue of a “terror” designation on Iran’s Islamic Revolutionary Guard Corps is a sticking point between Tehran and Washington.

Speaking at the Doha Forum, Kharrazi said designating the elite IRGC as a “terrorist” group was unacceptable while Malley said many sanctions on the IRGC will remain.

Meanwhile, the EU’s coordinator for the negotiations, Enrique Mora, has met with Iranian officials in Tehran and will leave Washington to meet American officials on Monday.