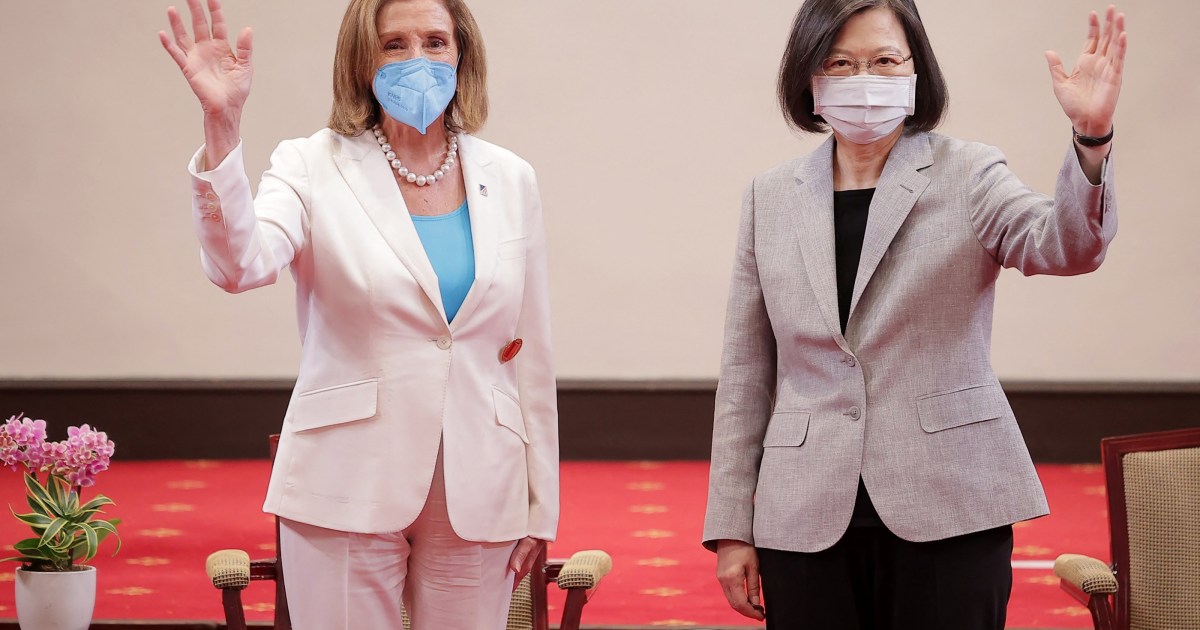 Taipei, Taiwan – Nancy Pelosi, the speaker of the United States House of Representatives, has left Taiwan after concluding a whirlwind visit that rocked US-China relations and sent shudders through global markets.

In response to Pelosi’s visit, China announced live-fire military exercises across six zones in waters surrounding the island of Taiwan that will start on Thursday and continue through Sunday.

Taiwan’s Ministry of Defense has said China’s unilateral action is an attempt to threaten Taiwan’s ports and metropolitan areas, but some residents are shrugging off the threat.

“Is China afraid of something? After all the big threatening talk, they clearly don’t want to encounter any American military units,” he said.

Despite the risks of a Chinese military response, Pelosi’s visit has exemplified the strength of the United States’s commitment to Taiwan and could generate greater international support for the island democracy, according to several experts in Taiwan’s political circles.

“The US is showing a strong commitment to Taiwan,” Jason Hsu, a former legislator in Taiwan and senior fellow at Harvard Kennedy School, told Al Jazeera.

“Although visits of members of US government and Congress to Taiwan are not uncommon, to have someone of Speaker Pelosi’s status and stature is indeed extraordinary,” Hsu said.

Speaking to Taiwan’s Legislative Yuan on Wednesday morning, Pelosi described Taiwan as “one of the freest societies in the world”.

Meeting Taiwan’s President Tsai Ing-wen, Pelosi praised Tsai for courageous leadership and called for increased inter-parliamentary linkage between the US and Taiwan.

“Values-based diplomacy is vital for Taiwan,” Hsu added, noting the focus that Pelosi and Tsai placed on this during their meeting.

“Democracy, freedom, human rights, and gender equality are some of the most important values that make Taiwan stand out in the world. By practising these values, we are trying to be a model for the international community and contribute to universal goodwill,” Hsu said.

Yet the visit has come at a price.

In response to Pelosi’s arrival in Taiwan, China has launched a series of economic salvos, banning Taiwanese food imports and halting exports of sand to the self-governing island.

Asked by reporters what tangible benefits the US can offer Taiwan to offset the economic cost of China’s new sanctions, Pelosi pointed to the CHIPS Act that passed the US Congress last month.

Pelosi said the bill, which provides $52bn in investment subsidies for US-based chipmakers, will “open the door to better economic exchanges” with Taiwan and will facilitate further bilateral research and investment in the critical sector.

Yet some Taiwanese experts have said that, in this instance of Chinese economic bullying, Taiwan should not be portrayed as a helpless victim that lacks its own agency.

“It was our own decision to willingly and warmly welcome Speaker Pelosi and we know what we are doing. Taiwan is a middle power and we understand the consequences involved when it comes to Chinese coercion,” he said.

“If the US wants to make it up to Taiwan somehow, the best way would be to establish more regional mechanisms we can participate in so we can jointly deter China’s economic pressure and strengthen trade between like-minded countries in the region,” he added.

“We don’t need sympathy but we do need action. Taiwan wants to join the Indo-Pacific Economic Framework (IPEF), the Comprehensive and Progressive Agreement for Trans-Pacific Partnership (CPTPP), and other regional bodies.”

The IPEF is the Biden administration’s flagship economic platform for the region. Taiwan was not invited to join when the initiative was announced in May in what was interpreted by some as a tactical move to make the group more attractive to ASEAN (Association of Southeast Asian Nations) countries, who avoid being seen to endorse Taiwan’s international participation.

Some commentators anticipate Taiwan may have a chance to join at a later stage.

“I think Pelosi’s visit will go some way to helping Taiwan get into the US-led IPEF,” said Sherlock Ching, a doctoral candidate researching cross-strait relations at National Taiwan University.

“Yet Taiwan can not stand still. It now needs to think about how to decrease its reliance on the Chinese market and reach new markets by way of establishing stronger relations with the US.”

After departing Taiwan, Pelosi is scheduled to meet South Korean leaders in Seoul before going on to meet her Japanese counterparts in Tokyo.

“Pelosi’s visit to Taiwan sends a clear message to Japan and South Korea too,” said Chen of Taiwan NextGen Foundation.

“I can tell you that leaders in those countries are watching closely,” Chen said.

“We will see a chain reaction across the region. Before the US ‘pivot to Asia’ was not effective but it is finding new impetus through a focus on collective security.”

The visit may also lead Taiwanese people to feel more secure about the US’s commitment to the island.

Surveys conducted after Russia invaded Ukraine in February showed about a third of Taiwanese respondents believed the US would support Taiwan if it too was attacked. Research published by the Washington Post suggests high-profile congressional visits to Taiwan not only significantly reassure the Taiwanese public of American support, but also increase confidence in its own military capacity.

“She was threatened by China and under tremendous pressure to cancel her trip, and yet she still came. That will make a greater impact” he said.

For Peter Wei of Taipei’s Beitou District, Taiwan’s focus must remain on enhancing its capacity to defend itself.

“Taiwan needs to rely on itself for its own defence.”