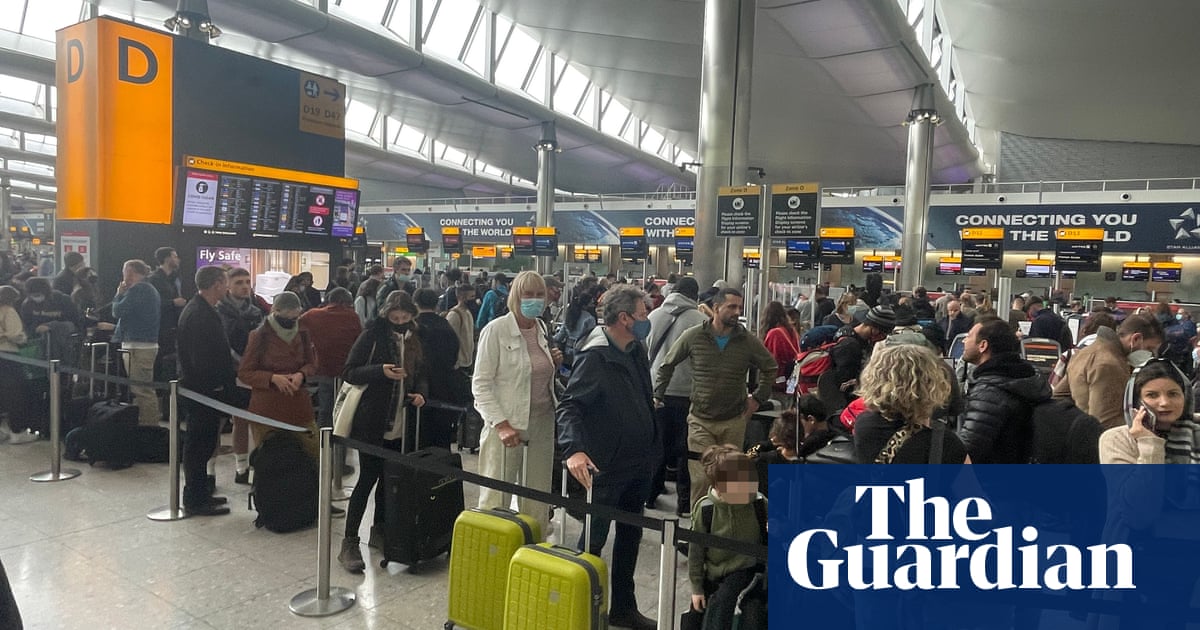 Airlines and cross-Channel services are braced for their busiest weekend since the start of the pandemic, with outbound and returning holidaymakers set to swell numbers at ports that are already struggling to cope with surging demand.

With all areas of the UK now on Easter holidays, passengers have been told to allow extra time to negotiate airport queues, as high rates of Covid infections worsen staff shortages at check-in and security.

Meanwhile, tailbacks on the major roads to the Channel are expected to intensify, as Eurotunnel expects rising traffic in both directions and P&O Ferries services remain suspended.

Airports are redeploying office staff with security clearance to frontline roles where possible to help mitigate the chaotic scenes of recent days, particularly at Manchester airport.

Manchester Airports Group’s chief executive, Charlie Cornish, warned passengers on Friday that waiting times of up to 90 minutes at security could persist for months. In a lengthy public apology, he said the airport had “cut costs just to survive” the pandemic, including voluntary redundancies.

However, following the “stunning recovery” in demand after Omicron and the relaxation of travel restrictions, “the simple fact is that we don’t currently have the number of staff we need to provide the level of service that our passengers deserve”.

“We have just not been able to hire people quickly enough,” Cornish said. “Practically, staff shortages mean that we cannot open all the security lanes we need. While we still expect most passengers to get through in less than 30-40 minutes, there will be times over the next few months when waiting times will rise to between 60 and 90 minutes.”

He said the airport had interviewed more than 4,000 people over the last two months, with more than 200 people currently being vetting before training, and 250 new security staff should start work by early May.

He said the airport was trying to avoid the alternative of limiting capacity and cancelling flights: “We do not think cancellations are what our customers want to see. While we know they don’t want long queues either, we are committed to operating all flights safely.”

The Greater Manchester mayor, Andy Burnham, has urged the government to help speed up the security clearance of new recruits. Police and transport staff from the city will be drafted in to help manage queues at the local authority-owned airport.

EasyJet, which has had to axe hundreds of flights this week, said it would be pre-emptively cancelling a further 50 flights a day over the weekend to minimise disruption. Large numbers of crew remain sick with Covid, affecting services at Gatwick, Luton and Manchester. However, the airline said it would still be operating more flights than at any point since 2019 – about 1,600 a day, 300 more than in August 2021.

According to data from analysts Cirium, some 769 flights have been cancelled by UK airlines in the last week, mainly British Airways and easyJet, and 367 outbound flights have been delayed for two hours or more.

The aviation regulator has warned airlines to set “deliverable schedules” to reduce the number of cancelled flights. In a letter to to aviation firms, the Civil Aviation Authority chief executive, Richard Moriarty, said: “Instances of late notice cancellations and excessive delays at airports are not just distressing for affected consumers but have the potential to impact confidence levels across the industry, at just the point when passengers are returning to flying.”

A higher influx than normal of returning passengers, after last weekend’s outbound peak at the start of most UK schools holidays, could also test queues at immigration.

A Home Office spokesperson said people “may face a longer wait time than usual due to a high number of passengers”. They added: “We are working closely with all UK ports and airports to ensure passengers have the smoothest possible journey, and we will continue to deploy our staff flexibly to manage this demand.”

The Port of Dover has warned of a further intensely busy period after much of the town was gridlocked last weekend as drivers sought to avoid queues for cross-Channel departures. Last weekend’s leisure traffic, with 30,000 departing passengers, was three times the level of a year ago, the port said.

Operation Brock, the traffic management scheme to deal with post-Brexit congestion, has remained in place, closing a 23-mile stretch of the M20 towards Dover to park thousands of queueing lorries.

P&O Ferries said it hoped to resume cross-Channel services at some point next week, when it hopes to have two of its four vessels based in Dover cleared to sail by the Maritime and Coastguard Agency. One ship, the Pride of Kent, was detained last week owing to concerns about the readiness of its new replacement crew, after the mass sackings last month.

Passengers booked with P&O on the Dover-Calais route have been told they cannot travel this weekend, as the rival operator DFDS, which had been accommodating P&O customers, is now fully booked.

High winds have also affected some services in the past week, and freight shipping was halted at Southampton port on Thursday.

The AA said holiday traffic on UK roads would peak on Good Friday, and 27.6m car journeys were expected over the Easter weekend.

There will be some disruption for people seeking to travel by rail next weekend as extensive engineering work by Network Rail and HS2 will close the west coast mainline between London Euston and Milton Keynes.