Skip to content
HomeNews9 killed, dozens wounded in three mass shootings across US 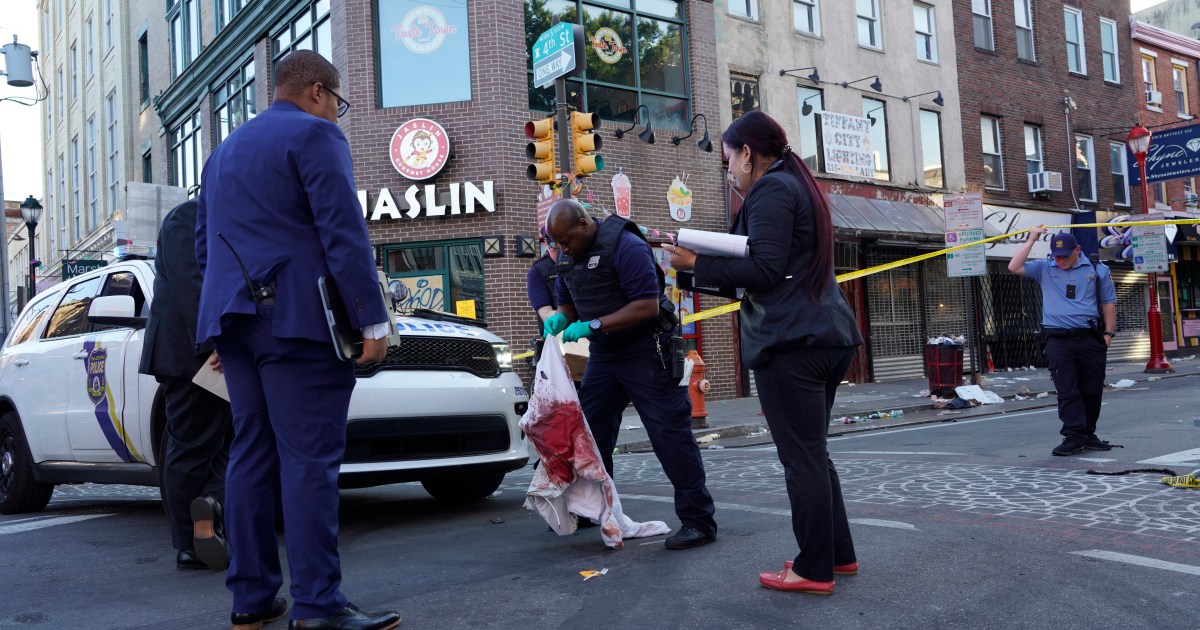 At least nine people have been killed and two dozen others wounded after shootings in three cities in the United States.

The shootings on Saturday night and Sunday morning were the latest outbreaks of gun violence that have left legislators scrambling to tackle the crisis.

In Philadelphia, a confrontation between two men on Saturday night escalated into a gunfight that sprayed bullets into a crowded bar and restaurant district, killing three people, wounding 12, and setting off panic as people tried to flee, police said.

Similarly, a shooting broke out after midnight near a bar in Chattanooga, Tennessee, killing three and wounding 14, according to police.

In yet another shooting in the early hours of Sunday, three people were killed, and two were wounded in Saginaw, Michigan, WEYI television reported, citing a police statement.

Unlike the other two cases, which affected bystanders unconnected to the shooting, all five of the people in the Michigan shooting were involved in the incident, police said.

No suspects were reported in custody as of Sunday evening in any of the shootings.

The violence struck as communities in three other cities are still grieving from massacres that killed 10 people at a grocery store in Buffalo, New York; 21 victims at an elementary school in Uvalde, Texas; and four people at a medical building in Tulsa, Oklahoma.

Police believe two men got into a fight and began shooting at each other, and one of them was killed by gunfire. A police officer observed the other gunman firing into the crowd and fired at him.

The attacker dropped his gun, as police believe he was struck by the officer, but he escaped through the crowd.

In Chattanooga, three people were dead and 14 wounded by multiple shooters, authorities said. Two died of gunshot wounds, and a third died after being struck by a vehicle while fleeing.

In Michigan, Saginaw police reported they were called to a scene where two men were pronounced dead, and one woman was transported to hospital where she died of her wounds.

Two other men were being treated for gunshot wounds.

There have been at least 240 mass shootings in the US so far this year, according to the Gun Violence Archive, a nonprofit research group.

It defines a mass shooting as one in which at least four people are shot, excluding the gunman.

US President Joe Biden has called on Congress to ban assault weapons, expand background checks and implement other gun control measures to address the string of mass shootings.

On Sunday, he renewed his call for restrictions on semi-automatic rifles.

A CBS News/YouGov poll published Sunday shows 62 percent of Americans back a nationwide ban on semi-automatic rifles. Support is even higher for background checks on all gun buyers (81 percent) and “red flag” laws (72 percent).

Chris Murphy, the lead Democratic US senator working on bipartisan gun safety talks, said on Sunday he thinks a package including investments in mental health and school safety and some changes to gun laws can pass Congress.