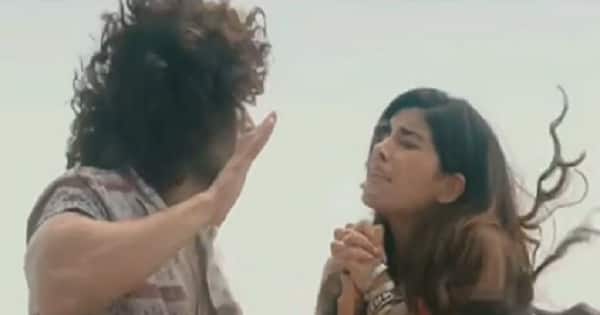 Vijay Deverakonda and Ananya Panday’s Aafat song is now facing huge criticism thanks t the lyrics in the song that have been used. While the song is called a crime watch, many users have picked out the rape dialogues like; Bhagwaan ke liye muje chod do’ in the song. And this rape dialogue used casually in the song hasn’t gone down well with the viewers. One Reddit user slammed the song lyrics and wrote, ” Liger song Aafat using a rape scene dialogue from old movies for.. aesthetics? Idk.”. Another user on the same Reddit page called how the misogyny in both industries, ” Disgusting, but what else can you expect from a marriage between a misogynist industry, and a super misogynist industry?”. One more user slammed and wrote, “Who in their right mind thought that it would be cool to put a dialogue from a rape scene into a modern song? Pathetic”. Also Read – Liger: Vijay Deverakonda’s mother organises a special puja for him and Ananya Panday ahead of the big release; ties them sacred threads [VIEW PICS]

Vijay Deverakonda and Ananya Panday’s Aafat song is being lashed out for using ‘rape scene’ dialogue so casually in the song Also Read – Liger: Did you know Vijay Deverakonda was approached for another Karan Johar film for his Bollywood debut but rejected the offer?

This is non-acceptable and we wonder if the makers will remove the part of dialogue from the song as people are expressing their displeasure that the scream of a helpless woman is used and mocked in the song. While talking about the film, the trailer has been receiving all the positive responses across while only this song Aafat is creating a stir n the internet for all wrong reason. Also Read – Trending South News Today: Jr NTR’s Hollywood debut, Tamannaah Bhatia’s gesture wins hearts, Karthikeya 2 Hindi version shows fantastic growth and more

Vijay Deverakonda and Ananya Panday‘s chemistry is too creating waves on the internet, the couple is leaving no stone unturned to promote the film as the release date is August 25, 2022. While did you know that the filmmaker f Liger wanted to cats Janhvi Kapoor opens Vijay as he confessed to being a huge fan of Sridevi and had a desire to work with her daughter? However, Janhvi’s date wasn’t available and later it was Karan Johar who suggested Ananya Panday’s name for the film.