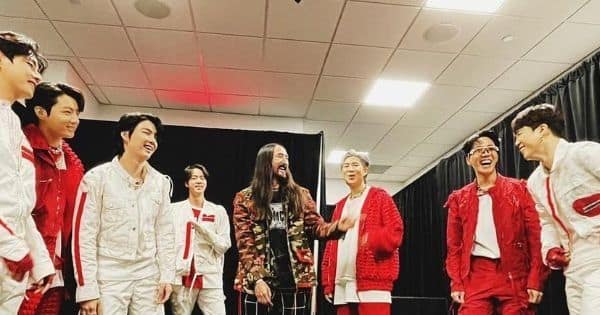 BTS boys love ARMY and ARMY loves BTS too. Time and again the BTS boys keep impressing their fans – be it through their music or through their kind gestures. Now, ARMY is happy once again with the band members. The boys met Mic Drop collaborator DJ Steve Aoki during their Los Vegas concert. A video of them is going viral in which we can see the BTS boys in their red and white clothes. Now, Steve felt a bit different and said he should have worm red and white too. The band members said that he looked great. Suga aka Yoongi even pointed out red and white colours on the clothes Steve was wearing just to make him feel inclusive. Have a look: Also Read – Trending Hollywood News Today: BTS wins Nickelodeon Kids’ Choice Awards, Kourtney Kardashian shares unseen wedding pic with Travis Barker and more

bts are such sweet people pic.twitter.com/qKpiY5Pmos

Now, the video is getting a lot of reactions from fans. A user wrote, “They will find some similarity with u n relate with u so one doesnt have to worry to blend in with them.” Another fan tweeted, “Crying over yoongi.” Read another comment, “The way yoongi said “white and red” is so cute ???.” Have a look at some of the reactions below: Also Read – Yeh Rishta Kya Kehlata Hai: Kicked about Harshad Chopda-Pranali Rathod aka AbhiRa’s wedding? Here’s latest Exclusive update

the way yoongi said “white and red” is so cute ??? https://t.co/EJKHwDVRi3

They’re always the one who make sure one feels comfortable around them ? https://t.co/Awn2XM4iia

This entire interaction was so wholesome?

*plays waste it on me aggressively* https://t.co/11EgrhpxHu

just gonna say… yoongi pointing out on the white and red on Steve’s fit reminded me of how my 4yr old godson would point out the colours on my clothes ???? https://t.co/VSJTtNR4xh

It is because of such kind acts that BTS ARMY keeps on increasing. More power to them. Also Read – Divya Agarwal ecstatic with response to Abhay 3; says, ‘Been a surprise package for me’ [Exclusive]