Skip to content
HomeEntertainmentBefore Attack, 5 John Abraham’s action-thrillers that you can enjoy on OTT platforms 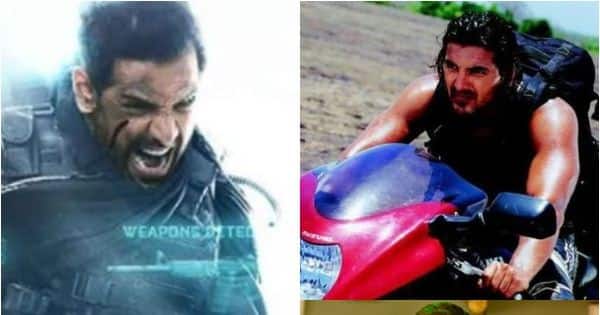 John Abraham, Jacqueline Fernandez, and Rakul Preet Singh starrer Attack is all set to hit the big screens on 1st April 2022. It’s an action thriller and John will be seen playing the role of a super soldier in the movie. The trailer has impressed one and all, the movie looks like a classy-Hollywood-style action flick. John is known for action thrillers, and before Attack, he has impressed us with his punches and kicks in many films. So, before Attack releases in theatres, here’s a list of John’s action thrillers that you can watch on OTT platforms. Also Read – BTS: Old video of Jungkook calling himself ‘super antibody’ goes viral after he tests COVID positive

Dhoom (Amazon Prime Video)
John Abraham played the role of an antagonist in the 2004 release Dhoom. It is clearly one of the best action-thrillers we have seen in Bollywood, and the bike chase sequences were simply excellent in the movie. You can watch Dhoom on Amazon Prime Video. Also Read – Trending Hollywood News Today: BTS star Jungkook tests COVID-19 positive, Will Smith apologises to Chris Rock for slap incident at Oscars 2022 and more

Force (Disney+ Hotstar)
Force is undoubtedly one of the best films of John Abraham. The 2011 release was a hit at the box office, and everyone still remembers the scene where John picks up a bike. The movie is now streaming on Disney+ Hotstar. Also Read – Kangana Ranaut calls Will Smith ‘bidga hua sanghi’ after Oscars 2022 slap incident; shares a pic of him doing pooja

Dishoom (Disney+ Hotstar)
Dishoom starred John Abraham, Varun Dhawan, and Jacqueline Fernandez in the lead roles. From action to thrill to comedy, the film had all the elements that a moviegoer wants. It was a hit at the box office, and you can now enjoy the film on Disney+ Hotstar.

Rocky Handsome (Sony LIV)
John Abraham starrer Rocky Handsome was a good film and had some amazing action sequences. But, the film didn’t do well at the box office. However, if you missed watching the movie in a theatre, you can now watch it on Sony LIV.