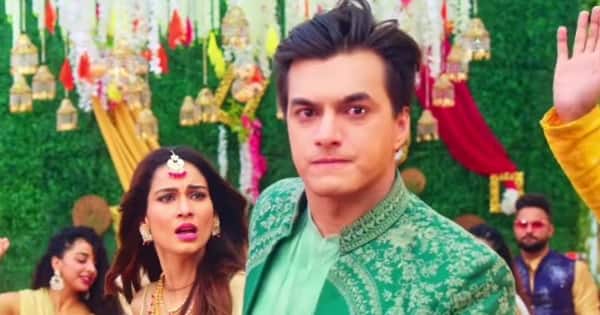 A new song featuring TV’s popular stars Mohsin Khan and Anerji Vajani is out now. The song is titled as Aashiq Hoon and it portrays Mohsin and Aneri being deeply in love with each other. However, Aneri then decides to get married to someone else and Mohsin is left heartbroken. He goes in a self-destructive mood and fans are in love with him. Mohsin Khan’s fans are unable to stop gushing over he has slipped into his character and emoted emotions of heartbreak, hurt and more through his eyes. Fans are also saying that they are in love with his psycho lover avatar. Also Read – Kundali Bhagya’s Dheeraj Dhoopar, Anupamaa’s Aneri Vajani to make a comeback? A look at stars who QUIT TV shows mid-way and returned

First, check out the full song below: Also Read – Yeh Rishta Kya Kehlata Hai fame Mohsin Khan’s latest pictures as he takes a dip in the water will make you go weak in knees

Damn.. Someone cast him in grey shaded character in a series, he will gonna rule it like no other??

These pucs are enough to prove the talent n versatility of this man?https://t.co/SAEr2ZbCvd
AASHIQ HOON OUT NOW #AashiqHoon #MohsinKhan pic.twitter.com/zEMzHInsQC

From cute sa boy falling in love to missing n longing for her to a heartbroken boy with anger n pain of betrayal behavin like a psycho lover..What a perfect craft by #MohsinKhan ..potential n talent>>>>?❤

I literally screamed so loud over this scene ?
He was a bomb in this mv.. killed it and how???#Mohsinkhan #Aashiqhoon pic.twitter.com/wfMpMX72Jy

Look at his eyes man?

So perfectly and beautifully he performed samar’s Character ?

Angst scenes & Mohsin
This combination is like treat to watch ?❤️

& How superbly he Acted here.

Mohsin hats off to you boy ??

What do you have to say about Mohsin’s performance in the song? Tweet to us and let us know.